The Elizabeth Islands are a hidden treasure that are missed by most people who visit Martha’s Vineyard. They are a chain of pristine, small islands that sit off the north coast of Martha’s Vineyard and separate it from Buzzard’s Bay. In total there are thirteen islands in the chain, the main ones being Naushon, Nonamesset, Pasque, Nashawena, Penikese, Gull and Cuttyhunk. 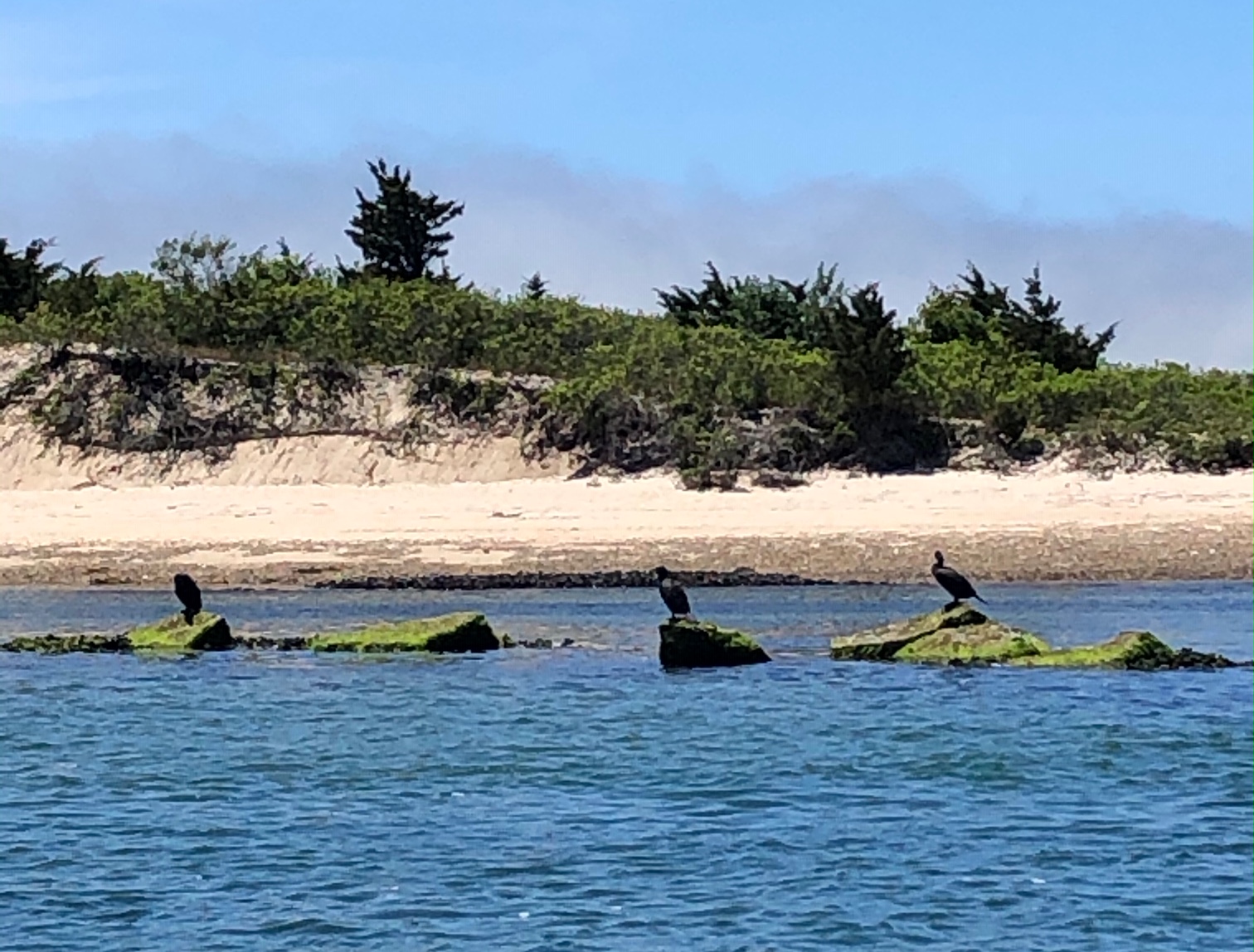 Naushon, Nashawena and Pasque all belong to the Forbes family and Naushon holds the honor of being the largest privately owned island in the US. However, although privately owned, Naushon has several coves, only accessible by boat, that are open to the public. The most picturesque of these spots is Taupaulin Cove, where in summer many yachts will moor and spend the night under the stars listening to the waves break on the sandy shore. The cove has an operational lighthouse and is also home to a herd of cows that can often be seen taking a swim in the bay. If you spot them out for a paddle see if you can  catch sight of the couple of belted Galloways in the herd. 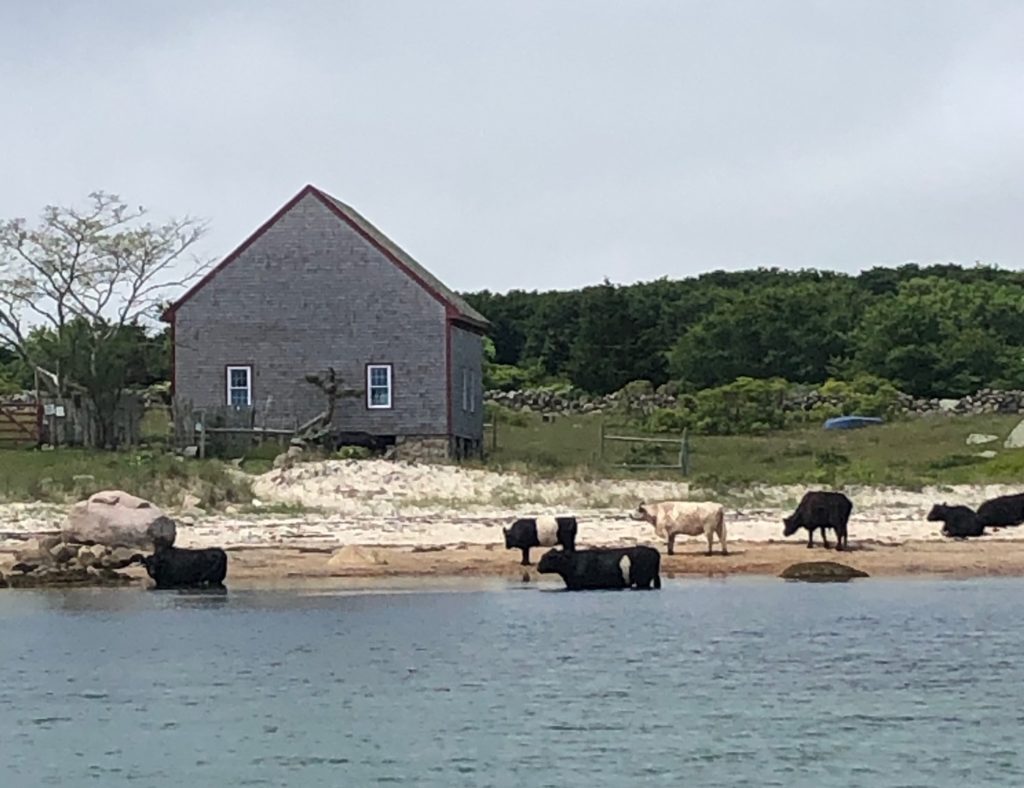 Nashwena also has its share of woolly livestock with a herd of Scottish Highland cattle that roam the edges of the island. They tend to be more shy so a sighting is not always on the cards but if you do they are unmistakable with their long horns and Scottish accents.
Penikese is owned by the State and was the site of a famed research facility that was the precursor of the Marine Biology Lab located in Woods Hole, it was also the site of the State’s only leper colony and then the site of a reform school for troubled teens. Today it has a much more serene life and serves as a bird sanctuary.
Gull Island is tiny and sits between Penikese and Nashawena and plays host to grey seals, harbor seals and numerous bird colonies.
Cuttyhunk has the largest population at a whopping 50 people, of which approximately 20 live there year-round. The harbor at Cuttyhunk is beautiful and a stopping point for some gorgeous yachts in the summer. Half of the island is set aside as a nature reserve and is a great spot for birding with populations of piping plovers, least terns and oyster-catchers.
The whole chain of the Elizabeth Islands are a mecca for fishermen, especially those in search of stripers. Cuttyhunk in particular draws fishing boats, especially to Sow and Pigs Reef where several stripers weighing over 70 pound have been reeled in!

The question is how to explore these islands when visiting Martha’s Vineyard for a vacation. The answer; Island Girl Excursions.
Island Girl offer 3, 4 or 5 hour boat excursions out to the Elizabeth Islands and then back via Menemsha harbor and the picturesque north shore of Martha’s Vineyard. 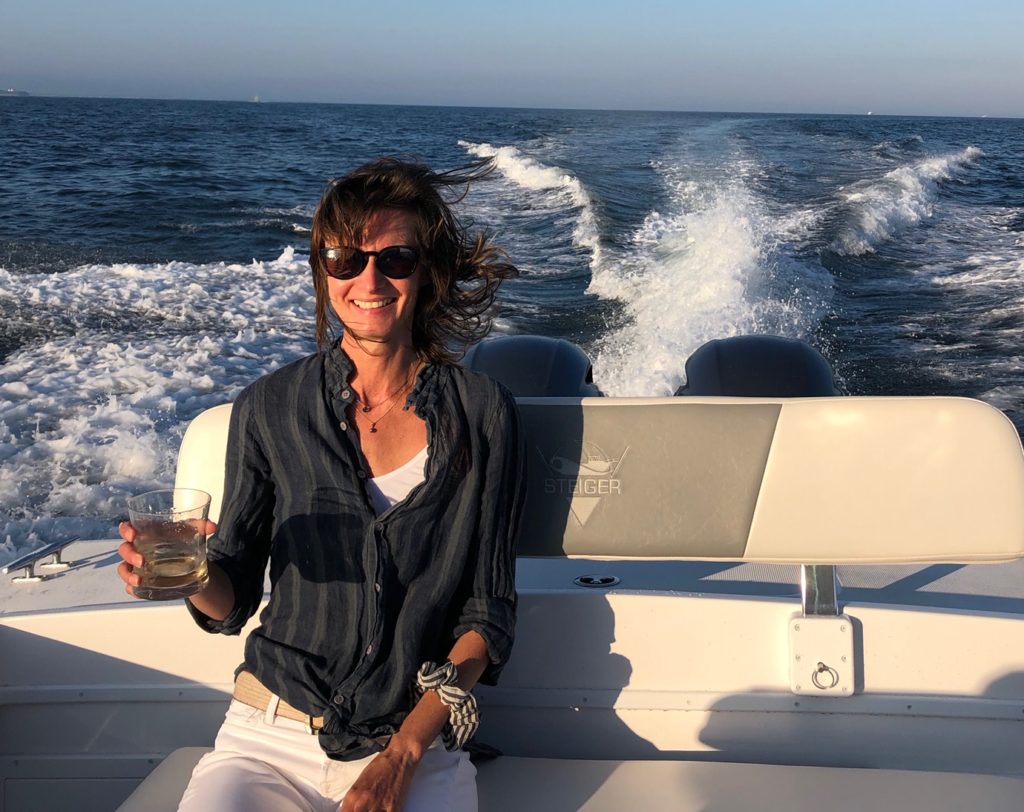 Starting out from Owen Park harbor in Vineyard Haven, Eamonn the captain will fire up the two Yamaha motors and shoot you across Vineyard Sound to Naushon. Normally a smooth ride with just a few bumps as you pass over the choppy currents of “Middle Ground”. Once at Naushon he’ll glide into Taupaulin bay and moor the boat under the lighthouse. Here’s your chance to dive in and get some swimming done, maybe in the company of the local cows cooling off their hooves! Alternatively grab a beverage of choice and relax. 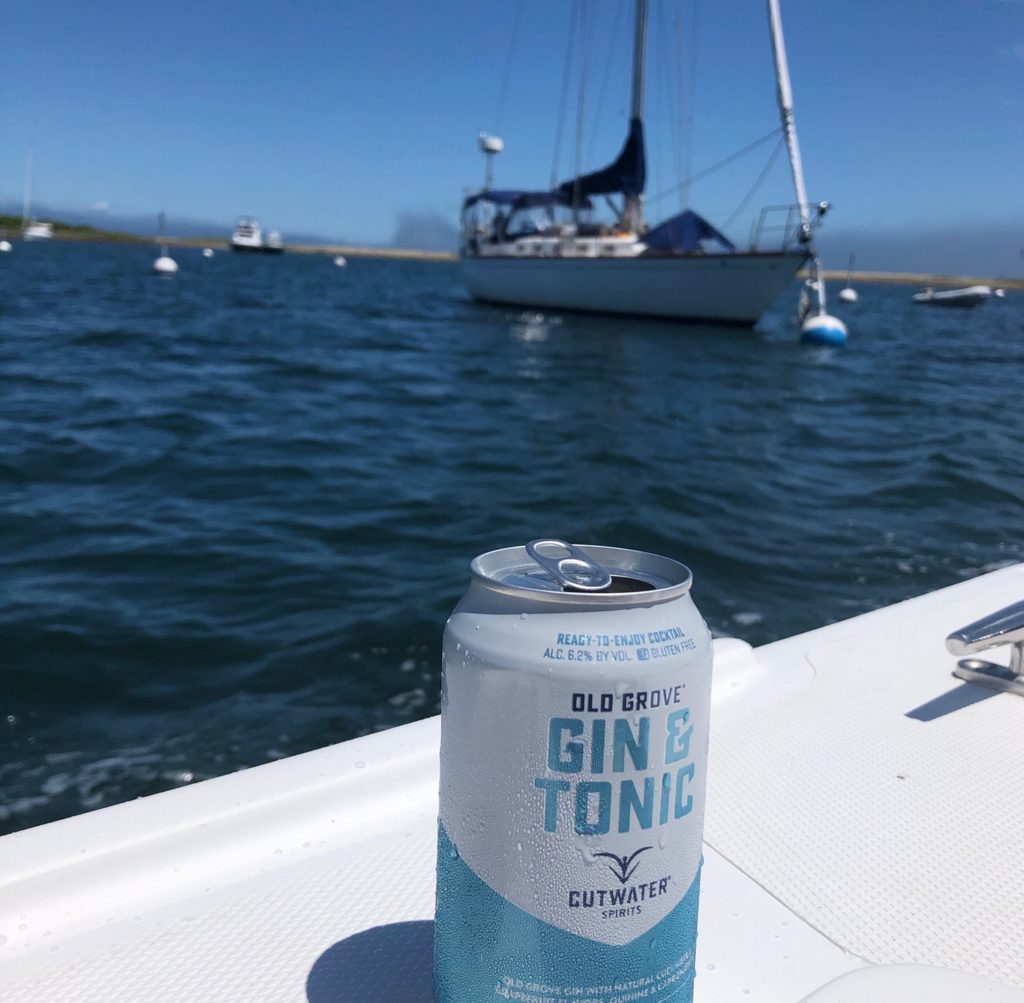 After Taupaulin bay you’ll head up along Pasque Island and then pass over Quick’s Hole and navigate the channel between Pasque and Nashawena Islands looking out for any long-horn cattle that are grazing or sunbathing near the shoreline. 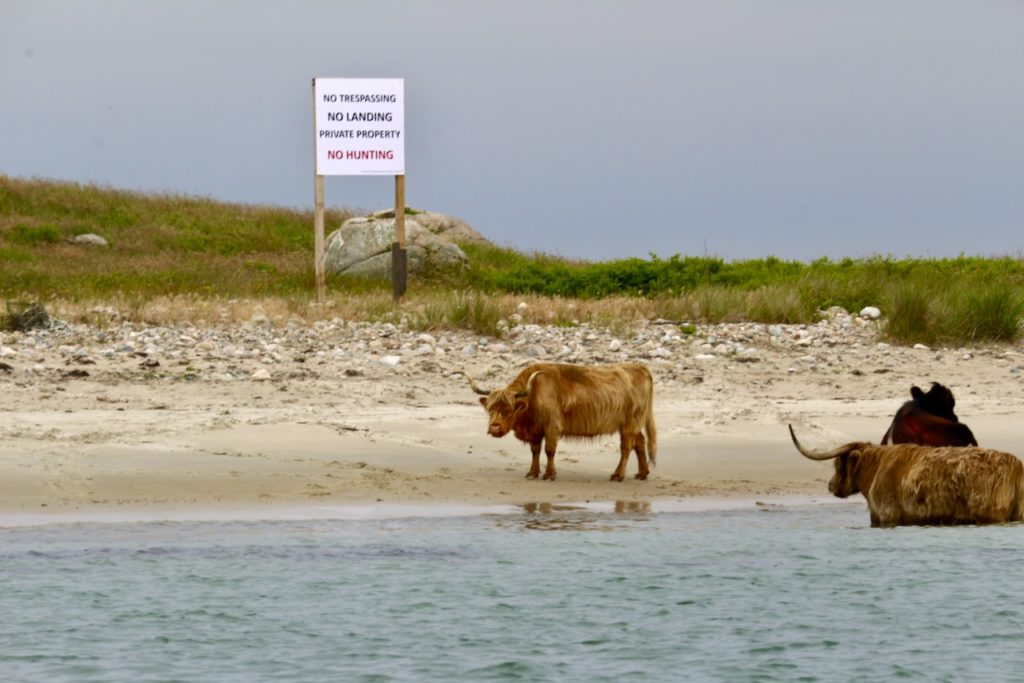 Heading towards Cuttyhunk you’ll pass the seal colonies and birds hanging out on Gull Island.
In Cuttyhunk Harbor you can be dropped off to get lunch at the famous Taco Stand and maybe take the hike to the highest point on Cuttyhunk and soak up the views across to Martha’s Vineyard and Gay Head.
It’ll then be back to full throttle across the sound, skirting the rocks at Devil’s Bridge, and back to Martha’s Vineyard to sit for a while under the lighthouse at Gay Head and take in the view. Then a short trip to Menemsha where you’ll motor into the famous harbor and on into Menemsha Pond to get a sighting of the last resting place of the original Orca boat from the movie “Jaws” that was left to sit and decay on the shore. You’ll also get a glimpse of James Taylor’s summer retreat high above the pond. 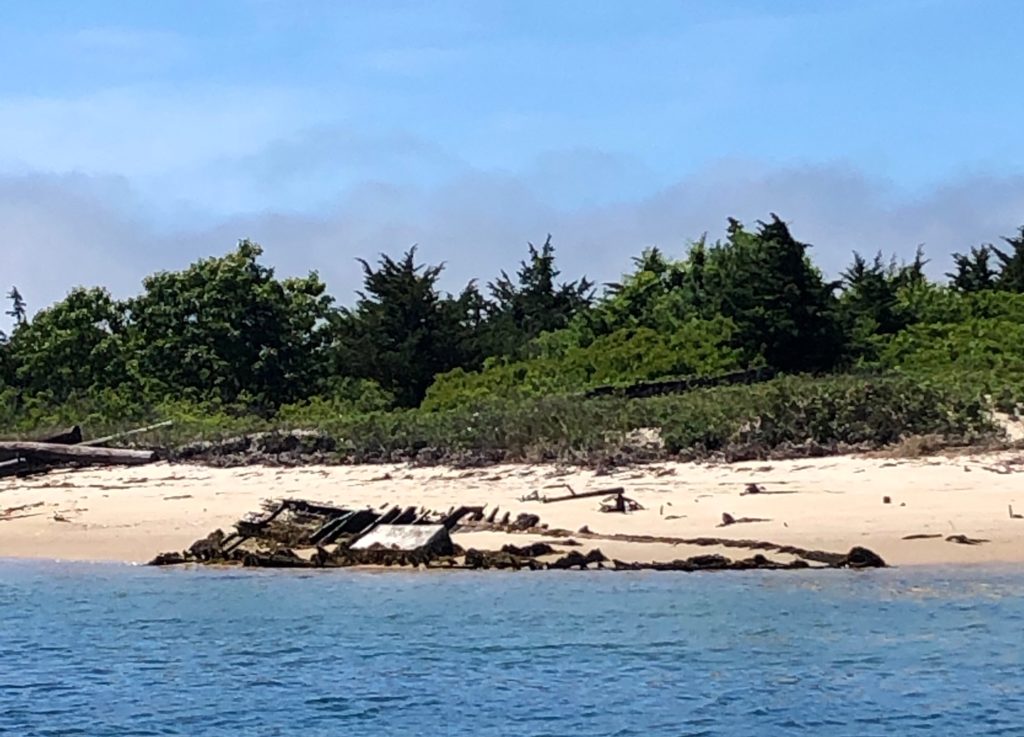